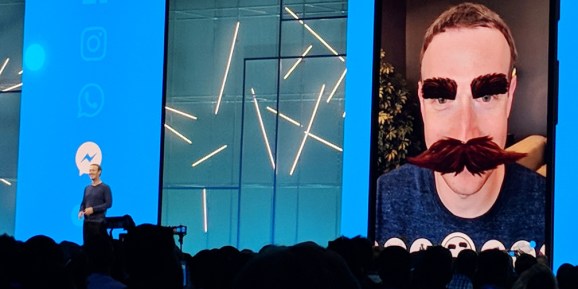 In a strange turn of events, Facebook reported revenue of $16.9 billion on Wednesday, exceeding expectations on the same day Apple kicked one of its apps out of the App Store for violating user rights. Revenue was even up in the United States and Canada, where Facebook made more than $8 billion — despite usage remaining relatively flat in North America.

While Facebook CFO David Wehner warned that growth will slow this year, CEO Mark Zuckerberg said product creation will increase, especially through messaging apps, and that the creation of new user experiences is central to Facebook’s mission in the year ahead.

“Messaging is the area that’s growing the most quickly, and this year people are going to feel these apps becoming the center of their social experience in more ways. We’ll roll out payments on WhatsApp in some more countries. Private sharing in groups and stories will become more central to the experience. We’re going to onboard millions of more businesses that people can interact with,” Zuckerberg said in a Facebook post.

Whatever Facebook plans to introduce for its family of apps, the company needs to do more than add payments or bring more advertising to the fast-growing Stories feature it took from Snapchat. With all the AI and social intelligence at its disposal — and a never-ending stream of controversy — Facebook had better make its next products a little weird.

By weird I don’t mean facial recognition run wild or new features that heighten the fears of privacy advocates; I mean something that takes advantage of Facebook’s social network data around groups, News Feed, perhaps even its new dating service to reignite people’s excitement about the good that can come from social online connection.

But the fact is we actually know very little about how new products from Facebook will look.

What we do know is that any new offerings are likely to include end-to-end encryption, not a bad decision for a company struggling to regain public trust.

As we learned last week, in the years ahead Facebook will create a common infrastructure for messaging on Instagram, Facebook Messenger, and WhatsApp that introduces encryption to two of the most-used messaging services on the planet (WhatsApp is already end-to-end encrypted) and makes it easier to send messages between them.

Another obvious result of this unification could be the addition of Instagram and WhatsApp call functionality to Portal, Facebook’s first internally made consumer product, which became available last fall. Portal and Portal+ currently only make Messenger calls, but such a move would easily extend calls to more than 1 billion people and further reduce friction between the company’s most popular apps.

A unique social experience — together with three of the world’s most-used messaging apps — could also give Facebook a greater foothold in people’s homes, allowing it to deliver something not available with smart displays and smart speakers from Amazon and Google.

A way to flip through Stories on a Portal device could be weird.

A universe of third-party AR experiences for use during calls with Portal, and which apps could use when you aren’t making calls, could be really weird.

Strange things derived from the many papers generated by Facebook AI Research could be interesting, like giving people a personal assistant that learns more about you over time, a tourist bot in VR, or a conversational commerce bot that can respond on your behalf.

Zuckerberg even alluded to this in a Facebook post he read at the start of the earnings call, where he said the company would “need to deliver new experiences that meaningfully improve people’s lives.”

“I’m not talking about the many day-to-day iterative improvements we make so that ranking gets a bit better or things get somewhat faster, but major improvements to people’s lives that whole communities recognize and say ‘Wow, we’re all doing something new on Facebook or WhatsApp that we weren’t doing before’,” he said.

In the past year, we’ve learned about Facebook’s involvement in the Cambridge Analytica scandal, heard a cofounder of WhatsApp say you should delete Facebook, seen Instagram’s cofounders leave the company, and witnessed repeated data breaches affecting tens of millions of people.

On Monday, Facebook turns 15 years old. We’ve come so far from the days when the platform was best associated with college students or an internal hacker culture.

In the past generation, Facebook succeeded in building a global monopoly and accruing more knowledge about the world’s social graph than perhaps any other company. What comes next should demonstrate Facebook’s insights into human connection, not just deliver incremental improvements to its many recommendation engines.

Going forward, the company should figure out a way to make products that don’t just engender more trust or sell ads, but that light people’s imaginations on fire. This won’t let the company off the hook for its role in the incitement of genocide, for facilitating meddling in the 2016 U.S. presidential election, for the alleged mistreatment of black employees and users, or for its exhibitions of bottomless ambition.

But it could help Zuckerberg accomplish his goal of giving users a memorable experience — and perhaps bring us something special that only Facebook can deliver.