Roughly a week after smaller rival Vodafone announced a July 3 launch date for 5G services in seven U.K. cities, top carrier EE today set an earlier date — May 30 — for a 5G launch that will cover six large cities at first, followed “rapidly” by 10 others. At nearly the same time, 5G commercial services will become available to consumers in its Commonwealth sibling Australia, as Telstra is aggressively rolling out 5G hardware and free data plans that will transform its trial network into something more concrete for early adopters.

Though the specifics were left ambiguous until today, EE was generally expected to launch 5G in the U.K. ahead of Vodafone. The carrier will offer 5G first in London, Cardiff, Edinburgh, Belfast, Birmingham, and Manchester, adding additional cities such as Bristol, Hull, Leeds, Liverpool, and Newcastle in its second round. Consumers will be able to order LG, OnePlus, Oppo, and Samsung 5G phones starting today; data plans that include a phone will start at £54 ($68) monthly, while SIM-only plans will start at 10GB of 5G data for £32 ($41), up £10 ($12) for a similar quantity of 4G data.

Notably, both EE and Vodafone confirmed today that they have opted to pause plans to offer Huawei 5G devices in light of the latter’s U.S. ban. While the U.K. carriers haven’t dropped Huawei altogether, they’ve signaled that they’re awaiting assurances of the company’s ability to deliver devices and software going forward.

Some Australian customers will be able to access 5G services even sooner. Telstra announced that it is beginning sales of HTC’s 5G Hub today, with Samsung’s Galaxy S10 5G to follow on May 28. That will include free upgrades for customers who registered for the Galaxy S10+ to S10 5G trade-in program announced in February.

Telstra also announced significant rewards for its 5G device pioneers: free 5G access for the life of the earliest adopters’ Telstra contracts and 12 months of free 5G add-on service for users who sign up in late June. The only hitch is that the carrier’s 5G services are still being built out, so while 5G services are already active in parts of Melbourne, Sydney, Canberra, Brisbane, Adelaide, Perth, Hobart, Launceston, Toowoomba, and the Gold Coast, there’s no guarantee of comprehensive coverage — early customers will get whatever’s available, 5G or 4G, at 4G pricing. 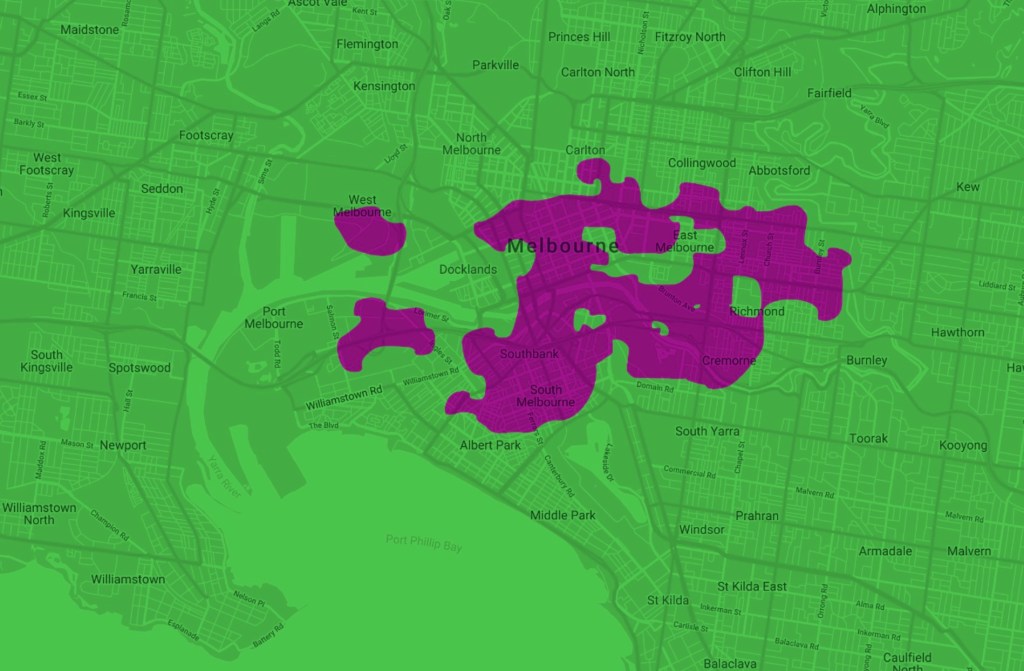 Above: Telstra’s 5G coverage in cities such as Melbourne, Australia is currently spotty.

To get free lifetime 5G service, Telstra customers will need to purchase either the 5G Hub, S10 5G, or any other 5G-enabled device the carrier offers before it launches new 5G plans in June. Telstra’s current plans start at AU$60 ($41) for businesses and AU$70 ($48) for personal use, each with data caps.

The carrier’s late June plans will give “everyone” access to free 5G for 12 months, a compromise designed to let customers experience the service “when they are in a 5G coverage area.” Based on Telstra’s 5G maps, 5G coverage currently varies wildly between cities, in some cases covering only parts of neighborhoods, while in others blanketing large areas. After 12 months — presumably enough time to offer true citywide coverage — 5G will remain free to users of Telstra’s top two plans, while everyone else will pay a AU$15 ($10) monthly premium.