I’m a longtime Apple user, but not an Apple apologist. In other words, I’ve spent years separating my love for iPhones from my knowledge that most of them will break if dropped accidentally — and that making beautiful, fragile devices has been Apple’s deliberate design strategy for years. It’s impossible to calculate how much money Apple has made from screen replacements, full device replacements, and AppleCare warranties over the past two decades, but there’s little doubt that it has used designed-in fragility to squeeze billions of additional dollars from its customers’ wallets. Even its latest $249 earphones, AirPods Pro, are designed to be tossed out rather than repaired when their batteries expire.

So whenever I hear Apple suggest it’s doing something for the benefit of consumers, or avoiding doing something because of the potential for consumer harm, I’m skeptical. This isn’t to say that Apple is incapable of aligning its own interests with those of consumers under some circumstances; rather, my view is that Apple generally does what’s best for itself, taking competitors and supplier constraints into account, and then markets the most consumer-friendly spin on that action to the public.

This week, Apple tried to tell European regulators not to mandate a universal charging standard for smartphones because it “would harm consumers in Europe and the economy as a whole.” The damage to consumers, Apple claimed, would include 1.5 billion euros in “innovation harm,” compared with only 13 million euros in environmental benefits. Both estimates were based on an Apple-commissioned Copenhagen Economics report that provided barely any factual basis for those numbers. For instance, the report claimed that consumers attribute 18% of a smartphone’s value to having a “modern device-end connector,” a claim that’s at best specious, if not impossible to prove. Depriving consumers of such a connector for three years would, through some magical calculations, somehow lead to that 1.5 billion euro harm.

My perspective is simple: It’s a good thing for consumers if a single charger can be used to charge your Apple laptop, tablet, and phone. Even better would be if a single charger could be used to charge any brand of laptop, tablet, and phone you may have. Back in 2009, European regulators looked at the mess of different chargers based on different device connector standards and said “clean this up.” To the extent that non-Apple devices (and certain Apple tablets and laptops) subsequently coalesced on USB-C, that’s been all to the benefit of consumers, with very few resultant complaints.

Although I don’t believe that Apple’s decision to (largely) go in a different direction with proprietary connectors was pro-consumer, I completely understand it as a business decision that was good for Apple — and it was marketed with consumer benefits. Back when Europe was trying to harmonize chargers around still-evolving USB standards, Apple was preparing to transition from its proprietary 30-pin Dock Connector to a smaller, reversible Lightning connector. The company used these connectors to profit off iDevice accessories and control the hundreds of companies that made those accessories. Switching to USB would have cut off a source of revenue that was important at that point in the company’s history.

At the time, Apple positioned the move to Lightning as supporting customers’ desires for higher-quality accessories, saying that it could weed out sketchier players by individually approving every developer and keep users safe from unknown safety and security threats. But word spread within the industry that Apple was using its new connector to jack up prices and dictate to third-party developers what they could and couldn’t manufacture, dramatically stifling innovation. Within a matter of years, Apple-specific electronic accessories all but disappeared. And even with proprietary Lightning connectors, iPhones can still be hacked. 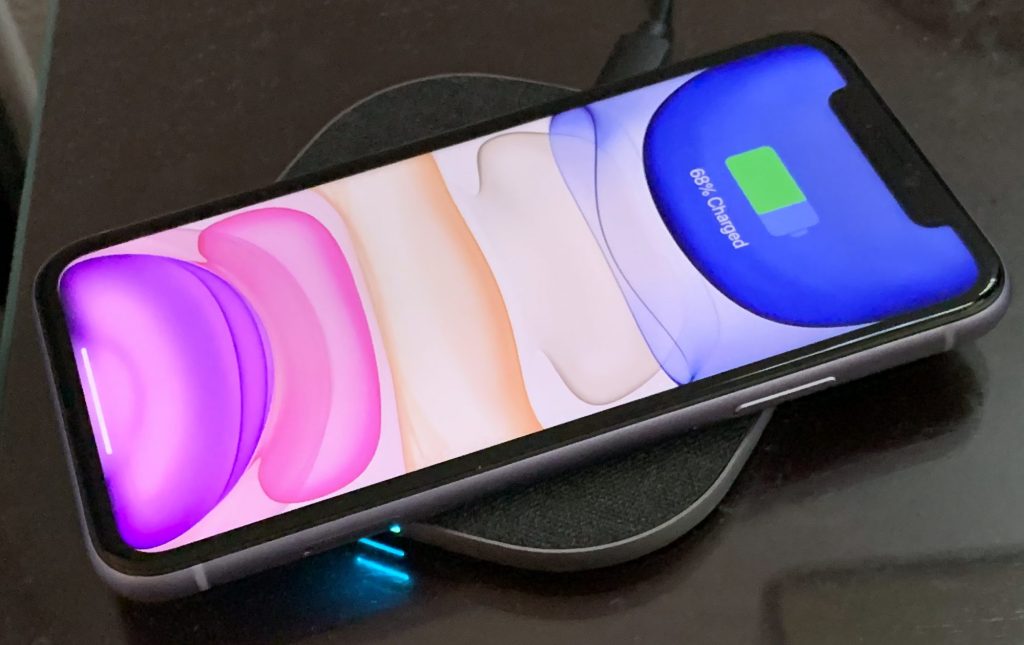 Above: An iPhone 11 charges on a Qi wireless accessory made by Totalee.

Many of the alternatives now use common wireless and wired standards such as Bluetooth, NFC, Qi, and USB to achieve the same results, and although Apple was a laggard in supporting some of them, it’s now involved with a wide variety of industry groups, sometimes even contributing its own research to improve their standards. At the same time, it continues to develop proprietary interfaces that go beyond the standards, such that Bluetooth AirPods work a little better with Apple devices, or specifically Apple-customized Qi chargers are supposed to refuel Apple devices a little faster.

Whether this approach is truly pro-consumer or merely pro-Apple is subject to some debate. If Apple’s research enabled safer fast wireless charging that might benefit all Qi users rather than just Qi users with Apple devices, society as a whole might be better off. But as competitors such as Samsung have their own approaches that deliver even faster wireless charging than Apple, there are now Qi chargers that deliver super-fast charging for Samsung phones, fast charging for iPhones, and standard charging for everyone else. From my perspective, consumers universally benefit from a common charging standard (Qi) through which multiple device-specific innovations can be accessed.

Moving to USB-C is basically the same situation. Apple already uses USB-C without issues in its Macs, and has been doing so in iPad Pro models since late 2018. The company might claim that there’s future “innovation harm” in using this connector, or the potential for a major environmental crisis (mass recycling) if iPhone users suddenly needed to go out and buy new chargers or cables. But Mac and iPad Pro users — say nothing of users of competing products — already have chargers, cables, and accessories that would work with USB-C iPhones. Getting rid of Lightning wouldn’t make that worse; instead, it would merely eliminate a need for different cables and chargers that Apple itself created.

With the Lightning accessory market effectively in shambles, this is as good a time as any for Apple to stop fighting calls for smartphone connector harmonization and get on board. Apple’s attempts to unilaterally control the market for iPhone and iPad accessories didn’t work out well for developers or consumers. So if Apple wants to do something that’s actually pro-consumer, rather than just pro-Apple, moving iPhones fully to the widely liked USB-C standard would be a big step toward improving charging solutions for users inside and outside of Europe.