Apple’s designers are generally admired around the world, but like other design teams, they’ve had their ups and downs over the years. The ups are so numerous and strong that the downs — iOS 7’s “flat” UI, some bizarre recharging Lightning accessories, and the iPhone Smart Battery pack — seem comparatively trivial. Sure, they were ugly or dumb, but over time, even Apple’s “bad” stuff tends to get replaced with better designs.

There’s only one Apple design aberration that has continued to get worse over the years since its introduction: the camera bump. Back in September 2012, Apple debuted the impressively thin fifth-generation iPod touch with an extruded camera on the back, and since then, its iPhone camera lenses have tended to stick out from its devices rather than sitting flush with their backs. Single lenses have only gotten bigger as they’ve evolved from the iPhone 6 to the latest iPad Pro, while dual lenses grew from the iPhone 7 Plus to even bigger oval-shaped bulges on the iPhone X, XS, and XS Max.

Rumors have circulated for months that Apple would move either the iPhone 11 Max or both 2019 iPhone 11 models to a triple-lens design, including a new ultrawide lens and larger sensors. Renders have oddly hinted at a square housing for the three lenses, which have been shown in a triangular orientation. Apple’s designers wouldn’t make something that weird, right?

Any ambiguity appears to have died after longstanding Apple scooper Mark Gurman tweeted an image that appears to confirm the design change. As shown above, the dot-shaped lens from the iPhone XR and the oval-shaped lenses of both iPhone XS models will for some reason all become large rounded squares, based on case molds he believes are accurate representations of the devices. For the XR sequel, the square apparently will hold only two cameras, while the XS sequels will each get three cameras in a triangular orientation.

For a design-obsessed company like Apple, it’s hard to explain the asymmetry of two to three dots inside squares, set off to one side of rounded rectangular devices. Some people freaked out last year when the symmetrical speaker holes on the bottom of the iPhone X made way for an asymmetrical bottom antenna bar on the iPhone XS, and this change is far more obvious.

My belief is that the camera square is just the latest sign that Apple is comfortable no longer holding back on adding beneficial new technologies merely for aesthetic reasons — in other words, placing form over function. Instead, it will do its best to smoothly integrate the new hardware, in the end letting improved functionality triumph over form. 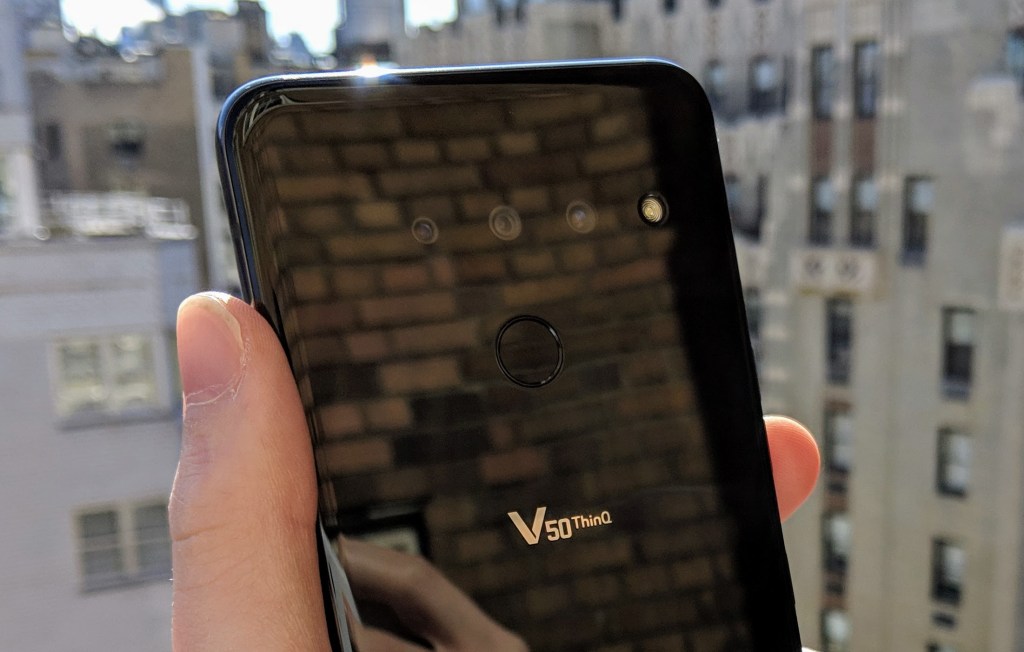 I can’t tell you right now why Apple didn’t go with the long bar-shaped design of the Samsung Galaxy S10 5G, which makes room for four cameras, a microphone, and a flash within a surprisingly elegant and well-centered shape. Similarly, I can only guess why it isn’t just recessing three cameras within an ever-so-slightly-thicker back frame, like LG’s V50 ThinQ. (Apple tends not to return to a perceptibly thicker overall housing between generations of products unless absolutely necessary.)

My belief is that there’s a very specific reason for at least the three-camera triangle design — history suggests Apple wouldn’t have embraced such an odd design over a further-elongated pill without a purpose in mind. Placing the three cameras closer together might enable stereoscopic 3D modes, superior depth perception, or improved overlap between cameras. It might not look great, but if it empowers better photography than the top-of-line Galaxy S10, there won’t be many complaints.

That said, I can’t yet fathom why a dual-camera iPhone XR sequel would need to shift from the iPhone XS’s oval shape to a square. Perhaps there’s something more to the new model’s camera system than merely adopting what was found in the XS and XS Max before — maybe the square houses additional sensors that aren’t obvious to the naked eye. If not, the only other reasons might be to create design symmetry between all three of the new models, or to keep lens components more similar, either of which would be unlike Apple.

To my eyes, the camera square doesn’t look beautiful, but like the last questionable Apple design decision — the IPhone X notch — I’m willing to accept it as a tradeoff for superior functionality until something better comes along. Given the directions that Apple cameras have been going in, however, the only way we’re likely to get over these camera humps is with thicker iPhone bodies, an alternative I think many people would be willing to entertain as Apple’s cameras continue to grow bigger and more numerous.