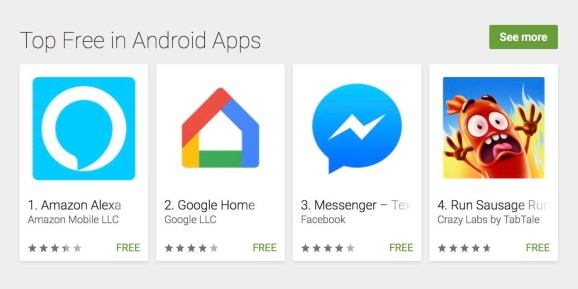 Amazon doesn’t disclose Echo sales numbers, but a key external metric suggests that the company’s smart speakers are having a great 2017 holiday season. On Christmas Day, Amazon’s Alexa app took the #1 spots on both the U.S. Google Play and iPhone App Stores’ free app charts, reflecting plenty of fresh Android and iOS user demand for the software used to set up Echo speakers. The #1 rankings placed Alexa ahead of perennially popular apps such as Facebook Messenger, YouTube, and Spotify, no easy feat for an app dependent upon a hardware purchase.

In addition to its #1 place on the iPhone side of the U.S. App Store, the Alexa app is presently ranked #3 on the iPad side. Notably, the Google Home app — which is used alongside Google’s Home series of smart speakers — currently ranks #2 in the U.S. Google Play app store and #6 in the iPhone app store, with a #1 ranking in the Canadian Google Play store. Both apps jumped from their holiday 2016 positions. According to App Annie charts from one year ago, the Alexa app ranked #7 and #6 in the U.S. Google Play and iOS App Stores, respectively, while the Google Home app ranked #37 and #46.

While the strong rankings will likely fall after holiday device activations have concluded, and some of the Echo and Home devices will no doubt be returned, the numbers reflect a growing interest in AI-assisted speakers. Last year, Amazon noted that holiday Echo sales were up over 9 times the previous year’s holiday period, and the Alexa app reportedly hit #5 on the iOS App Store. Demand has been fueled in part by aggressive Amazon pricing, and also by the mid-2015 rollout of Skills — optional third-party additions to Alexa’s vocabulary and capabilities — that enable Echo devices to grow over time in functionality.

Apple may have stoked its users’ interest in the category with its June announcement of HomePod, a $350 speaker designed to compete against Echo with Siri and superior acoustics. The company notably delayed HomePod at the last minute, pushing back its promised December release to an unspecified date in early 2018, forcing Apple fans to either wait or purchase a competing product. Google now offers a direct rival to the HomePod in its $400 Google Home Max, as well as much less expensive Google Home Mini and Google Home speakers, each capable of doubling as a connected home hub.

The Echo lineup is best known for speakers, but has recently expanded to include devices with screens, enabling video viewing, video calling, and text displays of news, weather conditions, and other information. In June, Amazon released the Echo Show, which combined a 7-inch touchscreen with speakers, microphones, and a camera, followed by the December release of Echo Spot, a smaller globe-shaped version with a 2.5-inch screen. In the absence of specific sales figures for individual models, it will remain unclear as to what fraction of total Echo sales come from screened devices, but Amazon’s heavy promotion of screenless models suggests that smart speakers continue to dominate its sales.