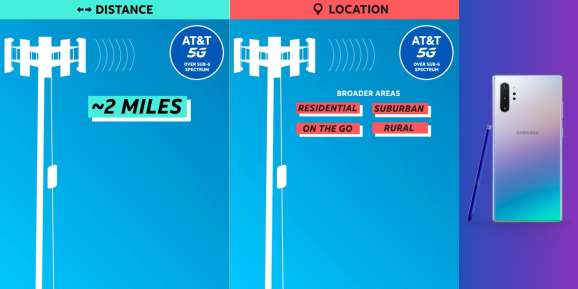 Normally, major 5G network expansion news has been exciting enough for carriers to announce first thing in the morning, but AT&T just continued its already confusing 5G story by revealing a big change in the dead of night: It’s launching a low-band 5G network across five cities in “the coming weeks,” with promises to cover at least 15 cities by February 2020. This will be the carrier’s first 5G launch targeted at regular customers.

The good news: Some form of AT&T 5G service will soon be available in Indianapolis, Pittsburgh, Providence, Rochester, and San Diego, followed by Birmingham, Boston, Bridgeport, Buffalo, Las Vegas, Louisville, Milwaukee, New York City, San Francisco, and San Jose early next year. Initial service maps actually cover wide swaths of each city, in some cases extending into suburbs, and the carrier suggests the low-band 850MHz signal will work at roughly two-mile distances from towers, including “on the go,” residential,” “suburban,” and “rural” usage.

AT&T says it will offer 5G service for free with certain high-priced unlimited monthly plans: Unlimited Extra and Unlimited Elite. It also plans to offer nationwide 5G “in the first half” of 2020, revised from its prior “early 2020” target. But it’s not making speed promises for the new service, and users will only be able to access 5G on a single phone at first: Samsung’s $1,300 Galaxy Note10+ 5G. The carrier says it will temporarily offer the phone at a discounted price of $350 to users who trade in an existing device and then choose qualifying installment and unlimited data plans.

As a brief recap, AT&T barely met a self-imposed late 2018 deadline to launch an early 12-city 5G network that was accessible using portable hotspots, branding the millimeter wave-based service “5G+” and claiming up to 2Gbps peak speeds. But contrary to its initial messaging, this network wasn’t actually available to regular consumers — only select businesses — and the carrier said it had decided to build out the initial 5G footprint to offer trial services to hospitals and other potential beneficiaries of early 5G access. It eventually offered one phone, Samsung’s Galaxy S10 5G, to business customers.

During that time, regular AT&T customers were offered “5GE,” rebranded 4G service that was no faster or otherwise better than the latest 4G on rival networks. Competitors and media universally described 5GE as a marketing scam, leading rival Sprint to sue AT&T for misleading customers. Even so, AT&T defended the rebranding effort and expressed pleasure that it had gotten into competitors’ heads. As rivals continued to roll out consumer networks and devices, AT&T claimed — with apparent seriousness — that it was the “world leader” in 5G.

While the Galaxy Note10+ 5G will be able to access the low-band 5G network, it’s unclear at this point how and when AT&T will offer devices that can access both its 5G and 5G+ networks. The carrier notes that 5G+ is available in parts of 21 cities, with plans to reach parts of 30 cities in early 2020. For other carriers, dual 5G network phones are generally expected to become available in early 2020.