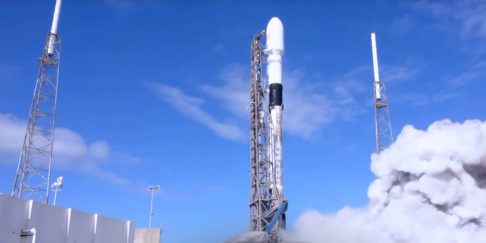 SpaceX's Starlink satellites have been going into orbit since 2019, potentially setting the stage for Apple to follow suit.

Somewhat akin to Apple’s work on a self-driving car, the company’s satellite communications project has been an open secret for some time — former Dropcam, Google, and Apple executive Greg Duffy referenced the topic on his public LinkedIn profile months ago. But even after Bloomberg reported the discovery today, the key question about Apple’s interest in satellites remains unanswered: “Why?”

Like its seemingly out-of-nowhere interest in making either cars or telematic systems for cars, Apple appears to be watching the pursuits of Elon Musk, founder of both Tesla and SpaceX, and planning its role in a world where those innovations become mainstream. Apple reportedly considered buying Tesla, but wound up building its own secretive auto division from scratch. Now it’s hiring multiple satellite experts who worked at Google, aerospace companies, and network-building firms, seemingly to emulate SpaceX’s Starlink project, though the actual end goal of Apple’s research isn’t clear.

Bear in mind that building, launching, and maintaining a constellation of satellites is a massive, multi-billion-dollar proposition. While a company with Apple’s resources could take on such a project, it entails significant enough staffing and regulatory challenges to require an entire company’s worth of additional infrastructure — and many years of development — not just a handful of new employees and a near-term deadline.

That having been said, here are three reasons Apple would bother with satellite research. Only two of them involve actually building and launching satellites.

SpaceX plans to deliver broadband service at speeds in the 500Mbps to 1Gbps range, with sub-35-millisecond latency — potentially lower. That would make the service competitive with current-generation home broadband, but well behind the cable industry’s next planned evolution to 10Gbps service. It’s currently somewhat hard to imagine Apple getting into this business, but anything’s possible.

Another theory is that Apple might use satellites to offer internet access to remote regions that aren’t served well by existing cellular networks. While this certainly isn’t impossible, underserved areas are typically underserved because they’re lightly populated and don’t represent major revenue sources for companies; new Apple businesses always target huge numbers of customers with a focus on making lots of money.

2. One-way communications. A similar collection of satellites could enable Apple to broadcast in a single direction — outbound — to multiple devices across the globe. Apple TV+, for instance, could see its shows available “over the air” anywhere the satellite signals can be picked up. Lower-bandwidth data such as News+ stories, apps, or other content currently served by ground-based servers could instead be fed to people from the skies.

According to Bloomberg, Apple has hired a former Netflix content delivery network executive for this project, making this application seem more likely. But launching a risky, expensive, and night sky-polluting collection of satellites just to distribute videos and data — something that’s already achieved with existing networks — doesn’t sound like something Apple would do, either.

It’s also possible that Apple isn’t focused on traditional satellite broadcasting or communications. Satellites can also be used to gather map imagery, provide global positioning data for location services, and support other features that are important to users as background rather than foreground tasks. Again, it’s hard to imagine Apple launching its own satellites for these purposes, but who knows?

3. Preparing for the technology or an eventual acquisition. Apple doesn’t need to launch its own satellites to prepare for a time when they might become a bigger part of telecommunications or broadcasting technology. It could just be hiring people who understand the hardware, software, and related engineering challenges well enough to keep Apple from being surprised by new developments in the satellite sector — and conceivably to support it in appropriate devices. Apple might also be setting up an internal team to assess the value of potential acquisitions from the sector, as it considers whether to go further into one of the aforementioned directions.

My personal feeling is that scenario 3 is the most likely for now. Apple is said to have a five-year timeline for producing results from this project, and SpaceX took over a decade to go from the design stage to actual satellite launches. While some might guess Apple will just copy SpaceX’s work so it can move faster, five years isn’t a long time when it comes to aerospace development. Given the slow pace of Apple’s car and augmented reality initiatives, each of which reportedly required mid-cycle reboots and haven’t yet borne fruit, the likelihood that Apple could go from nothing today to a fleet of self-made satellites by 2025 — without acquiring a company that’s already partially through the process — seems low.

Even so, it’s worth watching to see what Apple and its competitors begin to do in the satellite space. While early satellite TV and satellite internet never achieved the popularity their backers once enthusiastically predicted, the underlying technologies have advanced enough to be somewhat compelling as an alternative to traditional wired and terrestrial wireless communications. Whether and how Apple ultimately intends to capitalize on those advances remains to be seen.