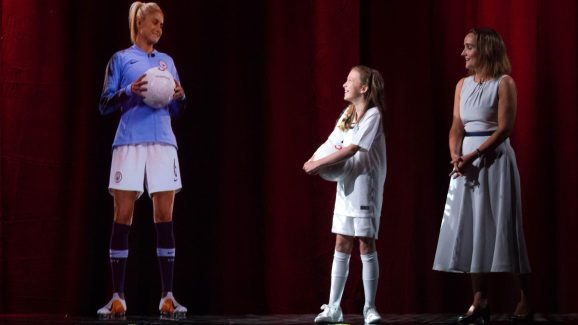 A holographic call using 5G enables a young soccer fan to meet and interact with a British soccer captain.

If you’ve ever experienced terrible cell service despite paying $40 to $80 per line per month, you probably aren’t inclined to shed a tear for cellular carriers that claim to be too cash-strapped to improve their network coverage without assistance. But as 5G networks roll out across the world, carriers are openly struggling with the high costs of upgrading their towers with new 5G radio hardware, and some are coming to a smart conclusion: Team up or suffer the consequences.

Vodafone this week became Europe’s poster child for this strategy, announcing this morning that its U.K. arm will share 5G tower networking equipment with rival Telefonica’s O2 network, while Reuters reports that a similar deal between Vodafone and Italy’s Telecom Italia will be announced on Friday. The aim of both deals is to merge separate tower infrastructures to hasten the rollout of 5G across large territories, a task that would otherwise certainly be more expensive and likely much slower for the individual carriers.

Consumers are the initial beneficiaries of these deals, as they immediately benefit from the multiplier effect of accessing two networks per country — seamlessly — as their phones switch between both carriers’ networks without blinking. Over time, the carriers will reap benefits as they focus not on building completely new individual infrastructures, but rather on bulking up existing areas for customers who were ill-served before, or only served by rivals. As 5G hardware — especially secure 5G hardware — isn’t cheap, and in some cases must be deployed at much higher densities than 4G gear, untold amounts of money and resources should be saved.

Ignoring roaming deals, there’s precedent for full tower sharing arrangements, even in the U.S. In the 2G and 3G eras, AT&T and T-Mobile shared towers and/or network resources in some cities, enabling both carriers’ customers to enjoy expanded access to early wireless data servics. Now T-Mobile and Sprint are effectively one-upping that deal for the 5G era with a full merger, one goal of which is to add Sprint’s mid-band 4G/5G towers to T-Mobile’s low-band and high-band towers so they can collectively deliver superior nationwide service to their customers.

Expect more of these deals going forward as carriers continue to contemplate their massive individual 5G upgrade expenditures, and governments — particularly but not exclusively those with heavier hands in their economies — mull whether to unify their cellular infrastructures (potentially for security reasons) and lease out service to carriers. If shared networks are successful in making 5G ubiquitous, the future question for larger carriers such as AT&T and Verizon may well be why they’re going it alone, and whether they’re disadvantaging their customers in the process.